JERUSALEM — The crowd surged and swirled, like the eddies of an ocean. Crushed against one another, hundreds of men stretched their arms toward the rabbi’s body, trying to touch the bier in a display of religious devotion.

It was the height of Israel’s third lockdown, in an ultra-Orthodox district near the heart of Jerusalem. Gatherings were banned. Masks were mandatory. Infection rates were spiking, particularly among ultra-Orthodox groups like this one.

Yet here were hundreds of mourners, most with mouths uncovered, attending an illegal funeral procession for a revered rabbi who had himself died of the coronavirus.

For these deeply devout Jews, attendance was a religious and personal duty. To briefly grip the rabbi’s bier, and symbolically assist his passage from this world, was a sign of profound respect for the dead.

But for secular Israeli society, and even for some within the ultra-Orthodox world, this kind of mass gathering suggested a disrespect for the living.

“What is more important?” wondered Esti Shushan, an ultra-Orthodox women’s rights activist, after seeing pictures of the gathering. “To go to funerals and study Torah? Or to stay alive?”

It is a question that channels one of the central conflicts of the pandemic in Israel: the spiraling tension between the Israeli mainstream and the growing ultra-Orthodox minority, an insular group of highly religious Jews, also known as Haredim, who eschew many trappings of modernity in favor of intensive religious study.

When the pandemic began, one Haredi leader promised that adherence to Jewish law would save his followers from the virus.

Throughout Israel’s history, the Haredim have been reluctant participants in mainstream society, often prioritizing the study of scripture over conventional employment and most do not serve in the army. The coronavirus has widened this divide.

Since the start of the pandemic, parts of ultra-Orthodox society have resisted the restrictions and protocols ordered by the secular state to counter the virus, preferring to follow the counsel of their own leadership.

The Haredim are not monolithic, and many have adhered faithfully to antivirus measures. Some Haredi leaders instructed their followers to wear masks, sign up for vaccines and close their institutions.

But other leading rabbis did not, and some ultra-Orthodox sects continued to hold mass weddings and funerals. They kept open their schools and synagogues, even as the rest of Israel was shutting down. A few on the radical fringe even rioted against the measures and clashed with the police.

“It’s a dispute that’s been running for decades,” said Eli Paley, the chairman of the Haredi Institute for Public Affairs, a Jerusalem-based research group. “There is tension between the Haredim and the rest of the society that touches on the most deep questions about Jewish identity.”

“Then came the coronavirus,” he said, “which made all the underlying tensions even stronger.”

Throughout the pandemic, the government has been reluctant to penalize Haredim who violate antivirus protocols; analysts argue that the prime minister, Benjamin Netanyahu, fears upsetting the ultra-Orthodox lawmakers within his governing coalition.

Israel leads the world in vaccinating its citizens, and is viewed as a bellwether for what a post-pandemic world might look like. But even as the vaccination rate rises, the country is still months from normality: The number of infections remains high — and the Haredim have borne the brunt.

Cases among Haredim compared to the rest of Israel 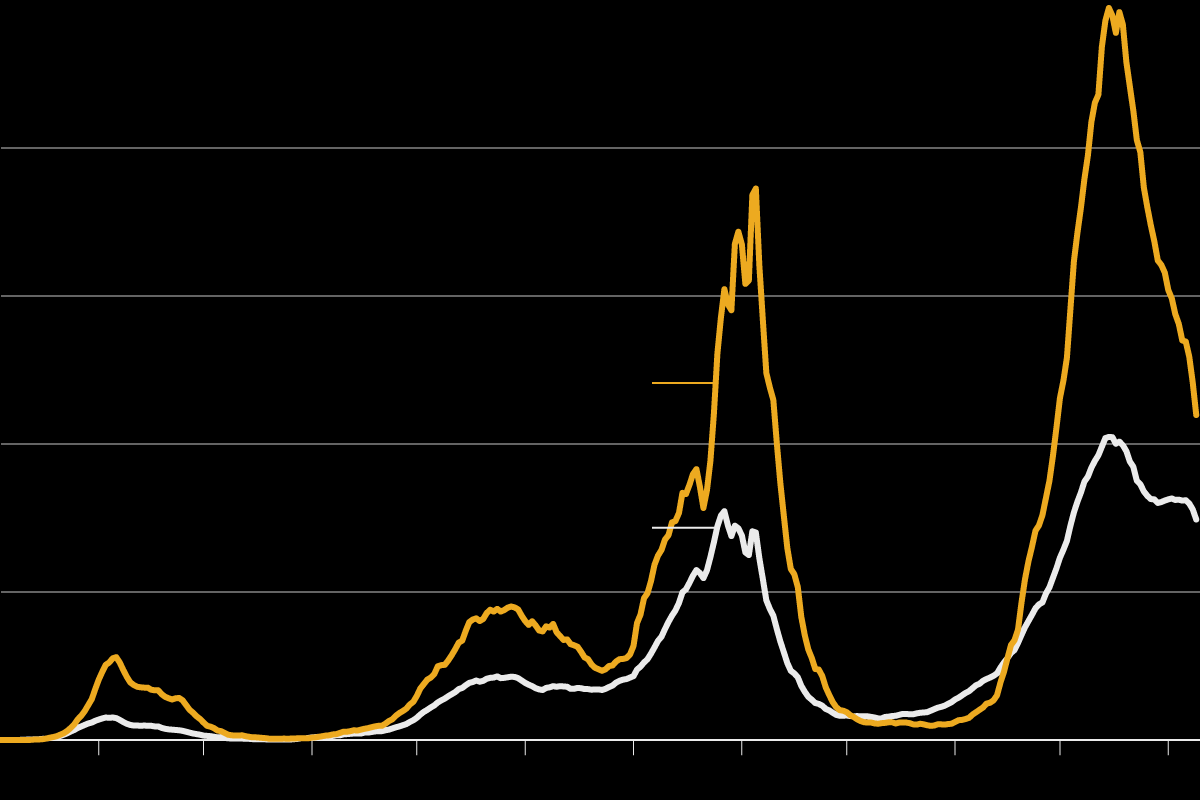 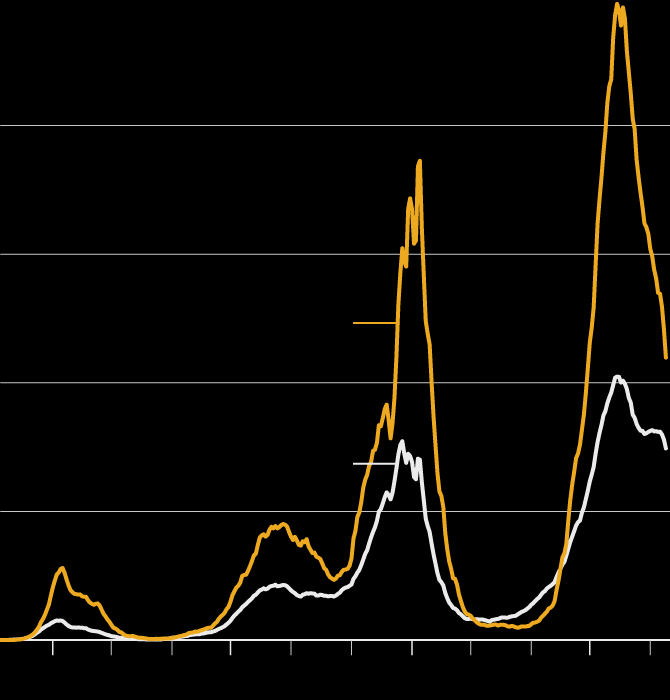 Rivka Wertheimer, a 74-year-old Haredi homemaker, was among the most recent wave of infected people.

Late one recent night, she was close to death.

Two ambulances were parked outside her cramped apartment in north Jerusalem, ready to rush her to the hospital. Two paramedics were inside, ready to lift her onto a gurney. A nurse at her bedside said she had just hours to live — unless she left now.

But the Wertheimers were not sure.

For more than three weeks, Ms. Wertheimer’s seven sons and daughters had cared for her at home. Hasdei Amram, one of a handful of Haredi charities providing at-home health care to coronavirus patients, had been sending nurses, oxygen tanks and medicine to her ground-floor apartment.

Wary of hospitals and outside intervention, her family was reluctant to change course even now, as their matriarch suffered another side-effect of the virus, a suspected hemorrhage.

Midnight approached. The oxygen machines bubbled away. To help them decide, the family called the man they trust more than any doctor: their rabbi.

“Everyone knows that human intellect has a limit,” said Chaim, Ms. Wertheimer’s eldest son. “When we ask a rabbi, we are asking him what blessed God wants.”

Science is of value, but for the Haredim it takes a back seat to faith, which governs every aspect of life in their community.

To see how this balance plays out, you can head south from Ms. Wertheimer’s apartment and into the narrow streets of the ultra-Orthodox enclave of Mea Shearim.

A maze of narrow alleyways, Mea Shearim was built in the 19th century, before the first major waves of Zionist immigration. A world unto itself, the neighborhood has long been a stronghold of the ultra-Orthodox. Some of its residents have always been skeptical of the Israeli state, and the pandemic has given fresh impetus to that tradition.

At a large yeshiva, or seminary, students gathered freely in clear violation of a government shutdown of the education system.

Down a narrow nearby lane, hundreds of Haredim gathered for another street funeral for a coronavirus victim. They stood shoulder to shoulder in a tight crowd, blocking the street. The rabbi leading the funeral halfheartedly asked the mourners to cover their faces. Most did not.

One man, Ezekiel Warszawa, 32, wove his way through the crowd, whispering to the mourners to reject the antivirus measures.

The virus was a punishment from God, he said — retribution for the Jews’ failure to obey religious rules. The only cure was religious observance, he said.

Not everyone took that view. Several mourners shushed and tutted, telling Mr. Warszawa to leave. The rabbi reminded mourners to cover their mouths.

And at other ceremonies that week, there was a more orderly air.

The posters were old-fashioned death notices: large white signs with simple black type that announced the passing of prominent local residents and rabbis, often from the coronavirus.

Spliced among these notices were announcements of a different kind: subversive messages that questioned the existence of the virus and the need for antivirus measures.

“Jews, open your eyes, why rush?” read one poster on the walls of several streets. “The gentiles can get vaccinated first.”

But for every ultra-Orthodox person attending a crowded funeral, or posting a subversive sign, there is another diligently staying at home. The Haredim have many leaders and sects, and are divided between Hasidic, Lithuanian and Sephardic traditions, each with its different subgroups. Many are frustrated by those who endanger others by breaking the lockdown rules.

“They have to wake up, because people are dying,” said Ms. Shushan, the Haredi activist. “How many funerals will come out of this one?”

Yet even internal critics of the Haredim, like Ms. Shushan, feel unable to fully break ranks. Despite their differences with other Haredim, they still feel defensive of their community and reluctant to provide ammunition to secular critics. And they feel intimidated by the level of secular vitriol.

“When they look at the Haredi people, they see all of us as one group,” she said. “All of us in black.”

Across the Haredi world, there is a widespread sense of being misunderstood. Many feel they are victims of a double standard, one in which secular people are allowed to protest in large crowds outside the prime minister’s residence every week, but the ultra-Orthodox are vilified for seeking to mourn en masse.

They also feel their critics do not understand just how important religious study, rabbinical leadership and the mourning of the dead are to their way of life. Nor how much of an existential disruption it is to close the religious schools where many ultra-Orthodox spend most of their waking hours in search of divine truth.

“Without learning, we cannot live,” said Chaim Wertheimer, Ms. Wertheimer’s eldest son. “This is our life.”

“The Torah is the will of God,” he said. “The more a person studies the Torah, the more he will know about God’s will.”

Hasdei Amram, the charity, is trying to bridge this divide. Based in an underground storeroom in Mea Shearim, the group fields thousands of calls a week from Haredim who have fallen ill with the virus.

The emergence of new virus variants has made the past month particularly devastating. The more contagious B.1.1.7 variant, first identified in Britain, now accounts for up to 80 percent of the cases in Israel.

“This wave is the hardest we’ve had,” said Menachem Markowitz, a coordinator for the charity. He…