US consumer price index data show core inflation eased in January, but there is an intensifying debate in financial markets over the course of inflation.

A key measure of prices paid by U.S. consumers was unchanged in January for a second straight month, underscoring the pandemic’s lingering restraint on inflation.

The core consumer price index, which excludes volatile food and energy costs, increased 1.4% from the prior year, a Labor Department report showed Wednesday. The broader CPI once again got a boost from higher gasoline prices, advancing 0.3% from the prior month and 1.4% from a year earlier.

The median estimate in a Bloomberg survey of economists for month-over-month core CPI was for a 0.2% gain. The overall measure was projected to rise 0.3%. 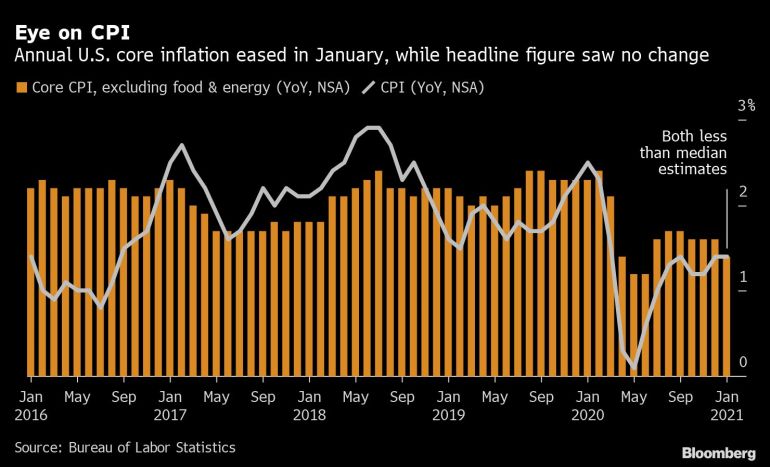 The CPI data are part of an intensifying debate in financial markets over the course of inflation. Despite the tame January figure, price pressures are set to firm in the months ahead. That’s partly a reflection of expectations that Congress will pass another large aid package and an anticipated pickup in demand as more are vaccinated against the coronavirus.

At the same time, a jobless rate that indicates elevated slack in the labor market is seen limiting wage growth, which makes up the biggest share of companies’ total costs.

The report showed declining prices for used and new vehicles and transportation services. At the same time, Americans are paying higher prices for fuel, apparel and medical care services.

Lawmakers continue to debate the size of the next pandemic relief package. President Joe Biden has proposed a $1.9 trillion plan, which some economists have warned could spur an outbreak of inflation. Other economists say there’s plenty of room for fiscal stimulus without fear of a more durable increase in price pressures.

Looking ahead, inflation metrics are expected to be distorted by so-called base effects in the coming months. Because of the pandemic and the recession it spurred, the CPI fell in March, April and May. When the annual figures are calculated this year, inflation will appear to be quickly accelerating when compared with the first three months of the health crisis.

Federal Reserve Chair Jerome Powell has said policy makers will ensure monetary policy continues to be a strong support to the economy “until the recovery is complete.” That, paired with the central bank’s willingness to let inflation run above its 2% objective for a period, means the Fed will likely leave interest rates near zero for some time.

How fast the labor market recovers will also play a role. Persistently high unemployment would limit workers’ ability to demand higher wages, limiting the degree to which inflation heats up. Powell is scheduled to speak Wednesday afternoon on the economic outlook.