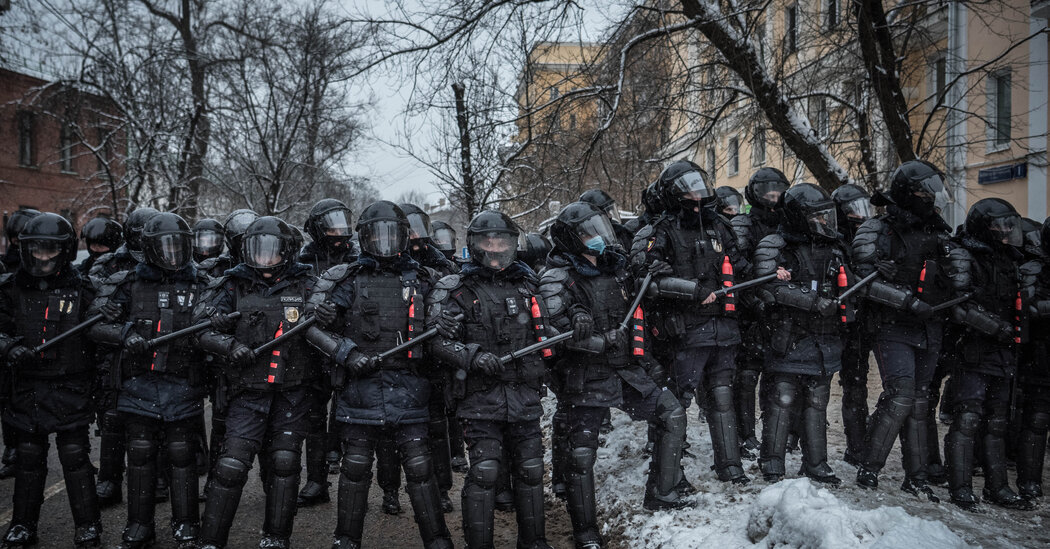 Tens of thousands of people turned out across Russia on Sunday for a second consecutive weekend rally in support of a jailed opposition leader, Aleksei A. Navalny. But where the protesters went, so did the police, meeting them in sometimes brutal clashes.

The protests started in Russia’s far east and swept across the vast nation, though crowds in some cities appeared to be smaller than last weekend. Demonstrators numbering in the thousands turned out in St. Petersburg, the Ural Mountains city of Yekaterinburg, Novosibirsk in Siberia, Moscow and elsewhere. More than 4,000 people were detained.

Even before Russians gathered, the Kremlin made it clear that police officers would be out in great numbers. Officers mostly responded with arrests. But by early Sunday afternoon, reports of police brutality against protesters had surfaced in several cities — including the possible use of electric shock devices on demonstrators and the beatings of others.

In Moscow, more than 1,200 protesters were detained, the OVD-Info activist group reported. The police shut down subway stations and paralyzed much of the city center as they scrambled to prevent protesters from gathering in one place.

The show of force — and Kremlin anxiety — in Moscow was unlike any seen in recent years. “All for one and one for all!” a column of protesters, which numbered in the thousands, chanted as they marched through the city toward the jail where Mr. Navalny was being held.

Mr. Navalny’s arrest has given a new focus to opposition to President Vladimir V. Putin, which had remained disparate even as his popularity fell.

Protesters, young and old, came out in the capital. Among them was Lyudmila Mikhailovna, an 83-year-old retired pediatric doctor who declined to give her last name. She said she was no great fan of Mr. Navalny. But she had watched his video about a palace on the Black Sea he said was built for Mr. Putin and decided to join the protest because “I am for honesty, nothing else.”

Mr. Navalny’s return to Russia on Jan. 17 shifted the political landscape facing the Kremlin — both at home and abroad. Inside the country, Russians unhappy with their president suddenly have a clear leader around whom to rally.

The appeal of Mr. Navalny’s case for those who do not share his political views is that he is perceived as a symbol of the main source of the anger that many Russians feel toward the Kremlin: injustice.

The authorities had made it clear that a strong police response was coming. In recent days, Mr. Navalny’s brother, Oleg Navalny, and Maria Alyokhina, of the punk band Pussy Riot, were placed under house arrest. Mr. Navalny’s wife, Yulia Navalnaya, was among those detained on Sunday.

Mr. Navalny’s allies were not deterred by the police presence on Sunday and called for more protests on Tuesday, when Mr. Navalny faces a court hearing over alleged parole violations related to a six-year-old embezzlement case that could send him to prison for several years.