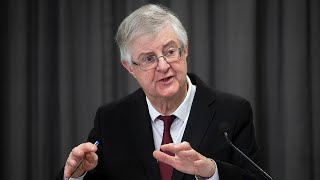 Are vaccines being administered in Wales?

The agency said 717 second doses were also given, an increase of 43.

Though, despite being statistically behind the other home nations in delivering the vaccine, Mr Drakeford announced: “we’re on track to vaccinate the top four priority groups by the middle of February, alongside the other UK nations.”

Mr Drakeford stated in a press conference that the rollout of both the Pfizer and Oxford/AstraZeneca vaccine “offers us a chance of a different and better future”, confirming that all frontline ambulance staff will have had their first dose of the vaccine by next week and that the vaccine will be extended to staff working in special schools, and to staff in schools and colleges who are at risk.

Then, on Jan 18, the Welsh government was further criticised for their “truly bewildering” policy of delaying the coronavirus vaccine rollout, after Mr Drakeford had claimed there limited supplies of the Pfizer jab.

However, the First Minister told Sky News on Jan 18 that Wales will be “getting more supplies of vaccine this week, particularly the Oxford vaccine.”

Following this criticism, the health minister, Vaughan Gething, shared on Jan 20 that over 10,000 people are receiving their first dose every day in Wales. This is the same as seven people being vaccinated every minute. Mr Gething also shared over five per-cent of Wales has now been vaccinated.

The First Minister has confirmed that the Welsh Government has missed its target to vaccinate 70% of over-80s by the Jan 25.

Mr Drakeford told the Welsh Parliament on Jan 26, that the aim was affected by adverse weather, with a “large number” of over-80s not feeling it was safe for them to leave their homes in the snow and ice.

He added: “All of those people will have been offered another opportunity for vaccination by the end of Wednesday of this week [Jan 27], so we will very rapidly make up for that number.”

Schools and colleges in Wales are closed and will remain so until February half term at least.

But the youngest pupils could return after the school holidays if infections continue to drop, according to the First Minister.

Mark Drakeford told a press conference in Cardiff on Jan 29 that he was “very keen to give two clear weeks’ notice” about plans for children to return to school.

Mr Drakeford said he understands the “anxieties” that school staff have about students returning to face-to-face teaching in Wales.

“We will do everything we can in the week ahead to work with the teacher unions and other staff who work in schools to put whatever we can in place to make sure that that workplace is as safe as it can be,” Mr Drakeford said.

“It’s partly why we talked today about starting with the very youngest children – children who are the least likely to suffer from coronavirus or to spread it to other people.

“We have to work together on this agenda because we have a common aim of trying to repair the damage that has been done to the education of our young people during the 12 months that have just gone by.”

The Government had previously arranged for schools to have flexibility over the first two weeks of the spring term, allowing them to choose when students would return to in-person learning.

However, due to the high numbers of seriously ill people in hospitals in Wales, the Government closed all schools before the return of students in early January.

Schools are only open for vulnerable students and children of critical workers.

Universities will continue to offer both in person and online classes, but students must stay home in their university accommodation under the new rules – except for limited purposes such as exercise, and must work from home wherever possible.

Wales’ GCSE, AS and A-level exams due to take place in summer 2021 have been cancelled, Education Minister Kirsty Williams announced on Nov 10.

Mrs Williams said it was impossible to guarantee a level playing field because of the impact of coronavirus, so grades will be based on externally set classroom assessments under teacher supervision.

Can I travel to Wales after lockdown?

England is currently in a national lockdown, meaning incoming and outgoing travel to other countries is banned until mid-February.

You may only leave your local area for a legally permitted reason, such as for work.

Scotland has also brought in a “stay at home” order and closed it’s borders, meaning travel is off the cards between all the devolved nations.

Mr Drakeford said: “Coronavirus doesn’t respect borders – we all have a part to play in keeping Wales and the UK safe. Please think carefully about where you are going and what you are doing. This virus thrives wherever we come together with others.”