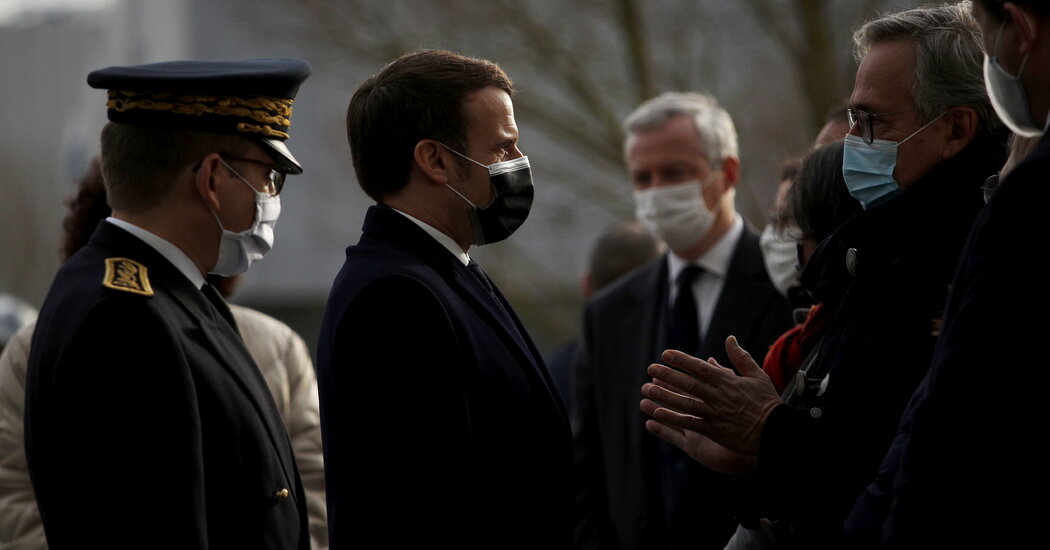 PARIS — President Emmanuel Macron of France said in an interview Friday that for Europe to be a credible partner to the United States it also had to be “an autonomous partner” with its own military and technological capacities, because “cooperation cannot be dependence.”

Speaking to a dozen foreign correspondents, Mr. Macron said he had a long telephone discussion last Sunday with President Joseph R. Biden Jr. in which he explained his thinking on the future of NATO.

“It’s not that we want to undo the existing alliances or partnerships,” he said. But, he continued, “Cooperating is choosing to work together for shared values and objectives. The day that cooperation becomes dependence, you have become somebody’s vassal and you disappear.”

The unreliability of the administration of former President Donald J. Trump, and his persistent criticism of NATO and the European Union, accelerated a European strategic reassessment. Mr. Macron has been the European Union’s most forthright voice, calling for investments in more jointly developed European military equipment and deploring the bloc’s technological dependence, whether on China or, as he put it, “even on an ally like the United States.”

Of his conversation with Mr. Biden, the French president said: “I told him we are for European strategic autonomy because Europe must bear its share of the burden.” The exchange was “very agreeable and pleasant,” Mr. Macron said, ending with an agreement to work together.

Other European countries, including Germany, have been cautious about using the word “autonomy.” The French president is facing an election next year, and a posture asserting French and European sovereignty is likely to play well on the center-right of the political spectrum, an important potential constituency for him. It also reflects deep personal convictions that Mr. Macron has expressed since 2017.

Looking relaxed in his trademark black turtleneck shirt and blue suit, his watch and a small clock on the table in front of him, Mr. Macron spoke with exhaustive lucidity for more than one and a half hours on a range of subjects, including threats to democracy, the pandemic, Brexit, and the relationship between France and its large, sometimes marginalized Muslim population.

By turns philosophical and pragmatic, always intense, the president interspersed his arguments with broad reflections, like: “You know, one cannot master the course of history, but one can try to find its thread.”

One such thread, Mr. Macron suggested, alluding to the Jan. 6 assault on the U.S. Capitol, was the rise of violence that had become a direct threat to democracies.

Without “the capacity to respect individual freedoms and create a framework for peaceful debate,” democratic societies faced collapse, he said. But some people, in France as in America, had concluded that “there is so much economic, social or other violence that physical violence in the street is justified. I believe this is a profound error that menaces democracy.”

Social media, he said, had brought about a kind of “anthropological mutation” characterized by “fascination with hatred.” At the same time, democracies are undergoing a “leveling that destroys the principle of authority,” without which they cannot function effectively.

These developments raised the urgent question of regulation of big private social media companies. “I am not in favor of delegating to private companies, because of their prominence, the right to decide about my life and our life in a democracy,” Mr. Macron said.

Turning to the pandemic, which has led to the imposition of a 6 p.m. curfew in France, and tighter border restrictions announced Friday, and to growing disgruntlement among a population tired of restrictions, lockdowns and deprivations, Mr. Macron said: “It is normal that there are the effects of fatigue, of impatience, of moments of tension on the issue of vaccines.”

But he defended Europe’s Covid-19 strategy, arguing that it was unrealistic to compare the open European continent to island nations like New Zealand that have largely stamped out the virus, or to smaller countries like Israel where vaccination rates have surpassed Europe’s.

“All of this only works if we do it together,” Mr. Macron said of the European Union’s approach to vaccinations, adding that it was a “rational strategy” to have the European Commission buy a range of vaccines for the entire bloc. He said the United States had “completely failed” at handling the first phase of the pandemic but was doing well now because it had invested massively in vaccines to “fast-track” their development.

“How do you do good science as quickly as possible? The Americans showed that very well,” Mr. Macron said. “Much better than we did.”

Warming to the theme of entrepreneurial initiative — one foundation of his attempt to reform France, even if tempered increasingly by talk of the importance of the state — Mr. Macron attributed American successes to “an organization model that is less averse to risk.”

Of the Europeans, he suggested, “Maybe we were sometimes a bit too cautious, sometimes we were very finicky,” although he stressed it was important to strike the right balance and not “abandon precautions.”

Balance has been an important theme of Mr. Macron’s presidency as he has sought to combine freeing up the economy with the preservation of France’s social model. This has led to suggestions that he tries to reconcile the irreconcilable in a constant on-the-one-hand, on-the-other-hand style of governing.

Faced by he pandemic, he said, it was inevitable that protecting people took priority over free-market reform. He vowed never to waver in his “whatever-it-takes” approach to Covid-19 — leaving the question of the debts accumulated for a time after the virus has been defeated.

Brexit, he said, was an “error” based on “a lot of lies,” a sovereign decision that he respected but that would complicate a lot of issues.

“I believe in continental sovereignty, I believe in nation states, and I don’t believe in neo-nationalism,” Mr. Macron said. “So, I favor a shared ambition and finding again a common destiny, and I hope that Boris Johnson and those around him will share this path.”

On the tensions in France provoked by Islamist terrorism, including three attacks in the second half of last year, and his own attempts to extirpate its roots and achieve better integration of the country’s Muslim citizens, Mr. Macron said:

“I have never said that I want moderate Muslims. That is not my problem. I don’t ask a Catholic to be moderate. I don’t give a damn. When it comes to someone’s religion, that does not concern me. On the other hand, I demand of every citizen, whatever their religion, to respect the rules of the Republic, because he or she is a citizen before being a believer or a nonbeliever.”