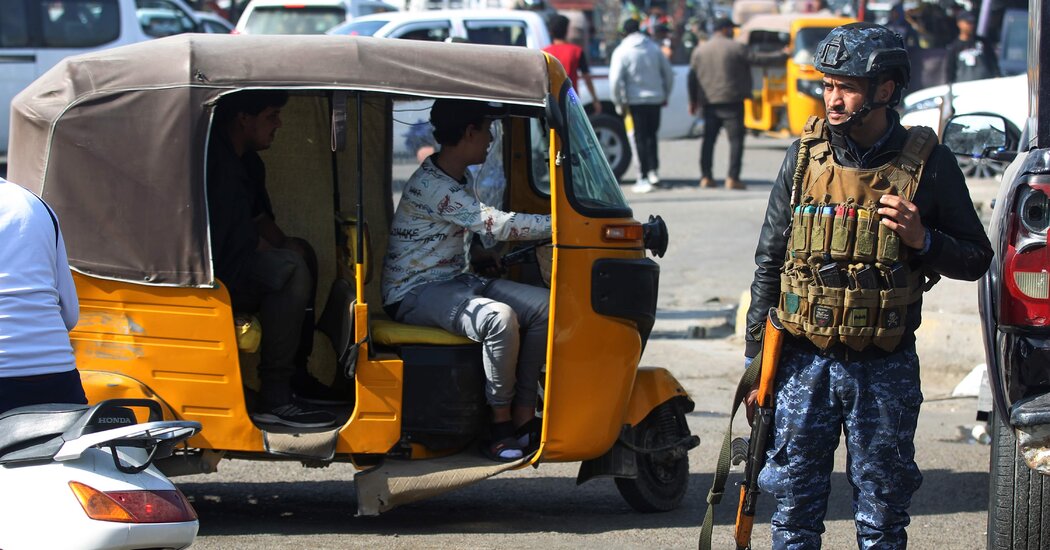 BAGHDAD — American airstrikes in a joint mission with Iraqi forces have killed the top Islamic State leader in Iraq, an attack aimed at stemming the group’s resurgence and exacting retribution for a deadly double-suicide bombing in Baghdad last week.

The Islamic State no longer holds territory in Iraq but has continued to carry out deadly attacks. The question of what kind of force is required to keep the group in check has been at the heart of American and Iraqi negotiations over reducing the number of U.S. troops in Iraq, and the American role in the raid this week illustrates Iraq’s continued reliance on the U.S. military.

Mr. al-Issawi coordinated the group’s operations in Iraq, counterterrorism experts said. Colonel Marotto said he was responsible for developing and relaying guidance to ISIS fighters and for helping to expand the ISIS presence in Iraq.

He said that nine other ISIS fighters were killed in the operation.

The American-led coalition has a policy of not commenting on which countries conduct specific airstrikes. But senior Iraqi security officials who asked not to be identified because they were not authorized to release the information said that U.S. aircraft carried out the strikes.

Iraqi officials said that the attack on an underground hide-out avenged the deaths of the 32 Iraqis killed in the ISIS attack on a Baghdad market last week. More than 100 others were wounded in the attack, the deadliest in Baghdad in four years.

ISIS claimed responsibility for the bombing, saying it was targeting Shiite Muslims and Iraqi security forces.

“We promised and fulfilled,” Prime Minister Mustafa al-Kadhimi tweeted about the operation that killed Mr. al-Issawi. “I gave my word to pursue Daesh terrorists, we gave them a thundering response,” he said, using an Arabic acronym for ISIS.

Iraqi and American officials said the operation that killed Mr. al-Issawi was months in the making as they closed in on lower-level ISIS leaders in mountain hide-outs near Kirkuk and gathered intelligence about what appeared to be a new center of ISIS operations there.

Mr. al-Issawi, originally from the Iraqi city of Falluja, crossed back into Iraq six months ago through the porous border with the Kurdish-controlled sector of eastern Syria.

In addition to the airstrikes, the operation included raids on ISIS guesthouses by Iraqi counterterrorism forces, according to an Iraqi military statement.

Although the last major ISIS attack in Baghdad was two years ago, the group carries out regular operations in provinces farther north.

“The intel showed that this guy was active as a coordinator of Islamic state operations,” said Michael Knights, the Jill and Jay Bernstein Fellow for security and military affairs at the Washington Institute for Near East Policy. “Iraq is still probably the largest operating environment for ISIS so it effectively means that he’s country manager of the largest subsidiary.”

At its height, ISIS controlled almost a third of Iraqi territory and entire provinces of Syria after declaring a caliphate in 2014 with Mosul as its capital. American-backed, Kurdish-led forces drove the group out of the last piece of territory it held — near the city of Baghuz in Syria — two years ago.

The killing of Mr. al-Issawi “demonstrates to the Iraqi people that the government is capable of effective action,” Mr. Knights said.

The crucial American help in the raid came amid increased political pressure by pro-Iran groups in Iraq to expel U.S. troops from the country.

After recent reductions by the Trump administration, the United States has about 2,500 troops left on three Iraqi military bases. While Iraqi capability in fighting ISIS has improved, the country still relies on intelligence, surveillance assets and air support from the U.S.-led coalition.

“From an operational point of view it’s important that ISIS is disrupted as much as possible but it obviously needs a lot of follow-up,” said Sajad Jiyad, an Iraq-based fellow with the Century Foundation. “ISIS has shown that it’s quite resilient and able to pop up in small cells, particularly in rural areas and in difficult terrain, and also targeting territory that is very difficult for the Iraqi forces to constantly police.”

Mr. Jiyad said he believed U.S. forces would gain good will through their help in anti-ISIS operations. But he said the U.S. drone strike that killed a senior Iraqi security official along with the Iranian commander Gen. Qassim Suleimani in Baghdad last year carried more weight in bolstering opposition to American troops in Iraq.

After the drone strike, the Iraqi Parliament passed a resolution demanding the government expel American forces from Iraq, a move that has not been implemented.

“The presence of U.S. forces is part of a larger issue not related to Daesh,” Mr. Jiyad said. “These sort of things you can’t just wash away with ‘the U.S. has been helpful against ISIS.’”