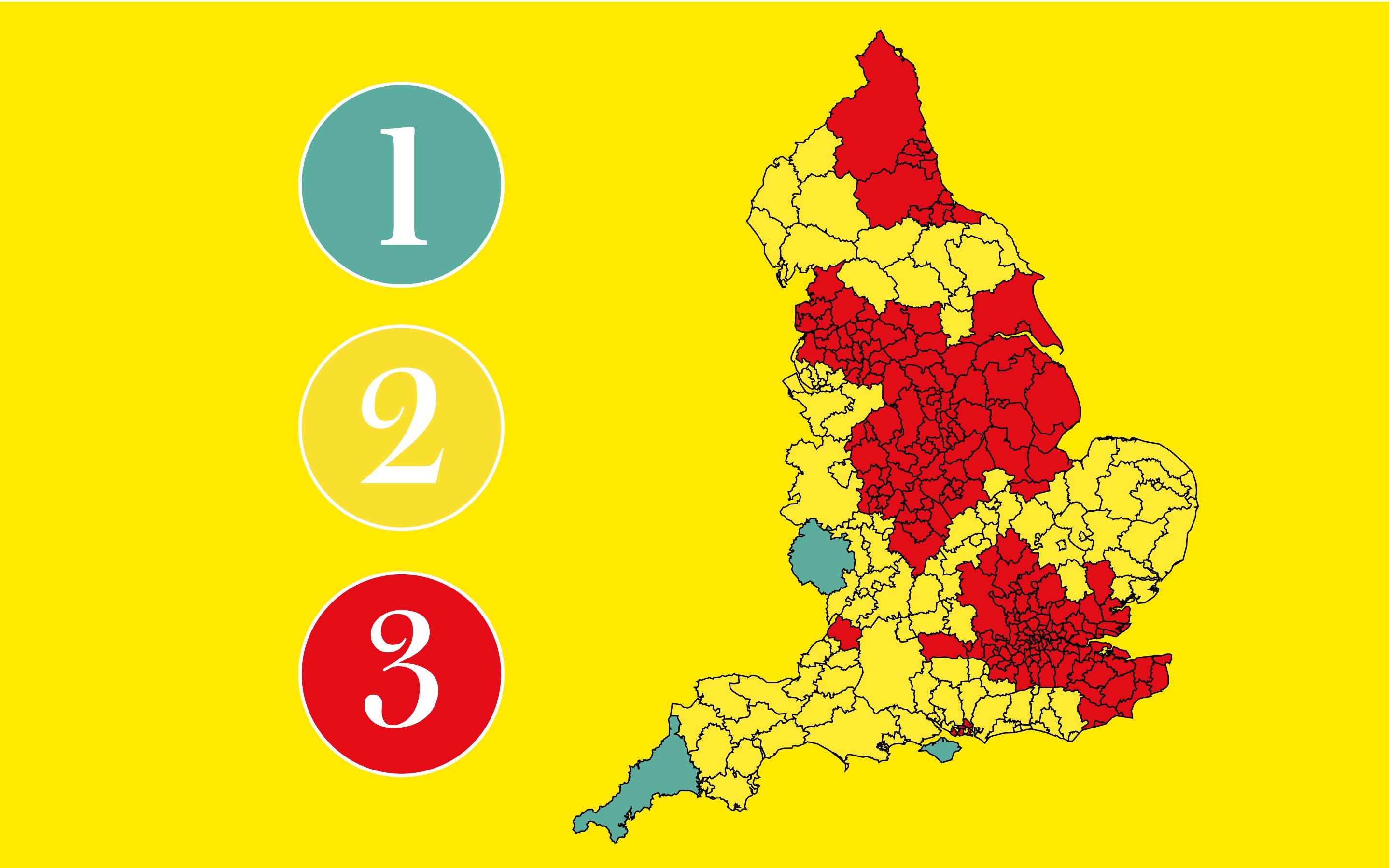 Instead, it’s closer to the Tier 3 average, which came in at 175 per 100,000 – and indeed cases in four out of the ten local authority areas – the city of Manchester, Wigan, Bury and Rochdale – stand above this rate.

Likewise, though cases have been in decline in the Greater Manchester area as a whole, the rates in a handful of areas are at best remaining stubbornly high and at worse beginning to creep up again. The city of Manchester has seen weekly cases tick up slightly to 179 per 100,000 from 175 on Dec 2, while Trafford has seen cases move from 96 to 106.

Cases are also rising in the key, 60 and over, age group which further muddies the waters. Half of Greater Manchester’s local authority areas have seen a rise in infections among the elderly.

This may explain why ministers have opted for a wait-and-see approach with Greater Manchester.

In contrast, North Somerset and the city of Bristol had a much better chance of moving down a Tier in terms of their key Covid-19 metrics.

None of these three local authority areas have a case rate above the Tier 3 average – with rates at 126, 115 and 153 respectively for December 10.

Herefordshire, the only area to move down into Tier 1, has also seen positive metrics since the end of England’s national lockdown.

Cases are not rising in the over 60s in Herefordshire and the area’s so-called positivity ratio – the share of swabs that come back from labs with a positive result – has dropped below the important threshold of 5 per cent, suggesting testing there is keeping up with cases.

Very low case rates in Cornwall and the Isles of Scilly and the Isle of Wight helped keep these areas free of tough restrictions. Since Dec 3 their key Covid-19 metrics have continued to perform well, and they have managed to stay in Tier 1.

A less likely contender ahead was the city of York, which has seen similar progress to Herefordshire and now has a case rate of 62 per 100,000.

What seems to have held York back, however, is its neighbours. Even though cases are declining across Yorkshire and The Humber, the vast majority of neighbouring areas still have a case rate above the Tier 2 average.

Will anything change now we have a vaccine?

In the wake of the news surrounding the approval of the Pfizer/ BioNTech vaccine, the Prime Minister addressed the current three-tier system, acknowledging that the restrictions are “tough” but are nevertheless essential to “keep the virus under control”.

In this press conference on December 2, Mr Johnson said that he hopes areas can “come down the tiers” before the Easter holiday, before emphasising it is necessary that the restrictions stay in place alongside the vaccine.

He added: “For the time being you’ve got to take it that tiering will be a very, very important part of our campaign against coronavirus.”

Mr Johnson also shared that we still had “some months before all the most vulnerable are protected” and so, we must remain cautions, and not be “carried away with over optimism”.

He emphasised that the Government’s plan relies on the public’s continued sacrifice “for those we love”.

On December 14, the regional director of Public Health England, Professor Kevin Fenton also reinforced the power of the jab in the fight against the virus. Speaking most specifically to Londoners, after they were moved to Tier 3, he urged them to accept the vaccine as soon as they have the chance, suggesting it is one of the “keys to unlock the door to the end of this pandemic”.

Then, during a press conference from Downing Street on December 16, Professor Chris Whitty commented on whether social distancing will end after the vulnerable receive their jabs, or if we will reach herd immunity before the vaccination programme ends.

The Chief Medical Officer shared that social distancing will remain in place after the vulnerable receive their vaccinations, as members of the public beyond this group will be a risk.

He said: “Population immunity will occur if we have vaccines that can reduce transmissions between people.” However, Professor Whitty shared he has a “high degree of confidence” that the jab will lower the risk of Covid-19 by a “large amount”.

What are the new rules and how long will they last?

The new Covid Winter Plan brings an end to England’s stay-at-home order, and allows for the reopening of shops, gyms, personal care and the leisure sector.

Collective worship, weddings and outdoor sports can resume and people are no longer limited to seeing one other person outdoors, as the rule of six returns once more.

Hospitality can reopen in the two lowest tiers, with the 10pm curfew tweaked into a 10pm last orders. In tier three, sales are restricted to takeaways and delivery.

These tiers will remain in place until March at the earliest, however, the placement of each area in each tier will be reviewed every two weeks.

In a press briefing on November 26, the Prime Minister explained how the stricter tier system would “strike a balance” and that every area has a “means of escape” and the potential to move down a tier.