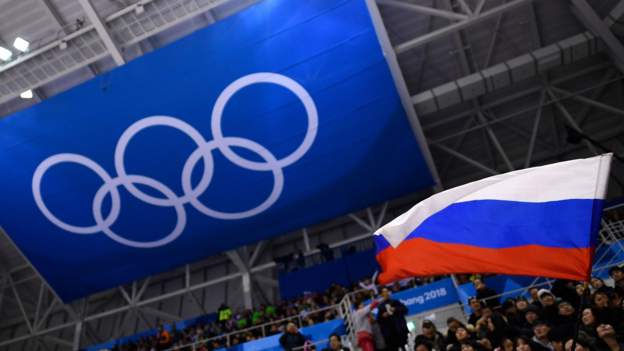 Russia’s ban from all major sporting events after a doping scandal has been cut to two years by the Court of Arbitration for Sport.

The ban still prevents Russia from competing in the Tokyo Olympics and Paralympics, set to be held next year, and football’s 2022 World Cup in Qatar.

Russia was initially given a four-year ban by the World Anti-Doping Agency.

Cas said the reduction of the ban should not be seen “as any validation” of Russia’s conduct.

The ban will now run until 16 December 2022, meaning Russia is also banned from competing at the Winter Olympics in Beijing in February.

Russia will be allowed to play at next year’s delayed Euro 2020 tournament because European football’s governing body Uefa is not defined as a “major event organisation” with regards to rulings on anti-doping breaches.

Russia had been told to hand over data to Wada as a condition of its controversial reinstatement in 2018 after a three-year suspension for its vast state-sponsored doping scandal.

“The panel has imposed consequences to reflect the nature and seriousness of the non-compliance and to ensure that the integrity of sport against the scourge of doping is maintained,” said Cas, which announced the ruling on Thursday.

“It has considered matters of proportionality and, in particular, the need to effect cultural change and encourage the next generation of Russian athletes to participate in clean international sport.”

Russia has also been prevented from hosting international events during the same period.

Athletes who can prove they are untainted by the doping scandal will be able to compete under a neutral flag.

A total of 168 Russian athletes competed under a neutral flag at the 2018 Winter Olympics in Pyeongchang.

Russia has been banned from competing as a nation in athletics since 2015.

The lawyer for Russian whistleblower and former Moscow laboratory head Grigory Rodchenkov – whose evidence was key to Russia’s suspension – said Cas’s decision was “nonsensical and undeserved”.

“Cas reduced the ban by half, allowing Russian athletes to participate in international sporting events anyway, and in effect upheld an already-limited ban in name only,” said Rodchenkov’s lawyer Jim Walden.

How the scandal unfolded