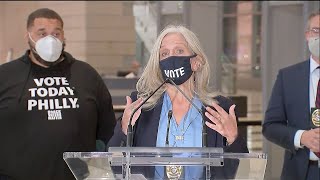 Pennsylvania’s Democratic Governor Tom Wolf called Mr Trump’s unsubstantiated claim about fraud in the US presidential election a “partisan attack”, and said his state was working hard to count more than one million mail-in ballots.

“Let’s be clear: This is a partisan attack on Pennsylvania’s elections, our votes, and democracy,” Mr Wolf said in a tweet. “Our counties are working tirelessly to process votes as quickly AND as accurately as possible. Pennsylvania will have a fair election and we will count every vote.”

Kathy Boockvar, Pennsylvania’s Secretary of State, said at a press conference on Friday morning that there are “several-hundred thousand” ballots left to count but they are in the “home stretch” of the count.

However, Ms Boockvar stressed that she is confident in the integrity of the election and that she is “not aware of any recent allegations of voter fraud”.

“I can say there are several-hundreds thousand ballots remaining to be counted. The closer the race is, the longer it takes. Because it’s so close, it’s not yet clear who the winner is.”