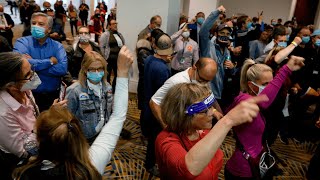 “I think we are a very polarised society now – and I’m worried about what’s going to come in the next days and weeks and months.”

The confrontation in Detroit started shortly before the Associated Press declared that Mr Biden had won Michigan.

Video shot by local media showed angry people gathered outside the TCF Center and inside the lobby, with police officers lined up to keep them from entering the vote-counting area. They chanted, “Stop the count!” and “Stop the vote!”

Earlier, the Republican campaign filed a lawsuit in a bid to halt the count, demanding Michigan’s Democratic secretary of state allow in more inspectors.

Mr Trump has repeatedly insisted without evidence that there are major problems with the voting and the counting.

Michigan Attorney General Dana Nessel, a Democrat, insisted both parties and the public had been given access to the tallying “using a robust system of checks and balances to ensure that all ballots are counted fairly and accurately”.

Michigan has been on edge for months over fears of political violence. Anti-government protesters openly carried guns into the state Capitol during protests over coronavirus restrictions in the spring, and six men were arrested last month on charges of plotting to kidnap Democratic Governor Gretchen Whitmer.

On election night, scattered protests broke after voting ended, stretching from Washington DC to Seattle, but there was no widespread unrest or significant violence.

The prolonged task of counting this year’s deluge of mail-in votes raised fears that the lack of clarity in the presidential race could spark unrest.