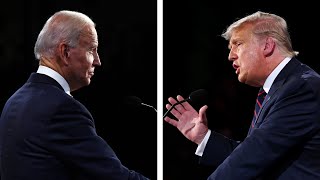 The meeting, which was far more civil than last week’s chaotic face-off between President Donald Trump and Democrat Joe Biden.

On Friday the Commission on Presidential Debates made it official, saying next Thursday’s debate is scrapped, leaving an October 22 event the final Trump-Biden showdown before election day on November 3.

Mr Trump created a political storm on Thursday after saying he would not participate in the October 15 event because it was being held virtually.

Mr Biden’s campaign had vowed that its candidate would participate in the new-format debate.

The Commission on Presidential Debates said the new measures had been put in place “to protect the health and safety of all involved with the second presidential debate”.

Steve Scully was due to moderate the 90-minute debate at the Adrienne Arsht Center for the Performing Arts in Miami.

The debate was to take the form of a town hall event, with Miami residents in the audience posing their own questions to the two candidates.

The final presidential debate will be at Belmont University in Nashville, Tennessee, on October 22 at 9pm ET (2am UK).

The 90-minute event, moderated by NBC News correspondent Kristen Welker, will also be divided into 15-minute segments on prepared topics.