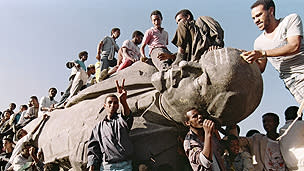 A chronology of key events:

1868 – Tewodros defeated by a British expeditionary force and commits suicide to avoid capture.

1889 – Yohannes IV killed fighting Muslim forces and is succeeded by the king of Shoa, who becomes Emperor Menelik II.

1889 – Menelik signs a friendship treaty with Italy, which Italy interprets as a protectorate. Ethiopia rejects this interpretation.

1895 – Italy invades Ethiopia, but its forces are defeated the following year at Adwa. Italy recognises Ethiopia’s independence but retains control over Eritrea.

1913 – Menelik dies and is succeeded by his grandson, Lij Iyasu.

1916 – Lij Iyasu deposed and is succeeded by Menelik’s daughter, Zawditu, who rules through a regent, Ras Tafari Makonnen.

1930 – Zawditu dies and is succeeded by Ras Tafari Makonnen, who becomes Emperor Haile Selassie I.

1941 – British and Commonwealth troops aided by the Ethiopian resistance defeat the Italians, and restore Haile Selassie.

1963 – First conference of the Organisation of African Unity held in Addis Ababa.

1974 – Haile Selassie overthrown in military coup, and dies in custody the following year

1977 – Somalia invades Ethiopia’s Ogaden region, and are defeated the following year with massive help from the Soviet Union and Cuba.

2005 April – First section of Axum obelisk, looted by Italy in 1937, is returned to Ethiopia from Rome.

2006 December – Exiled former dictator Mengistu Haile Mariam is convicted, in absentia, of genocide at the end of a 12-year trial. He is later sentenced to death.

2018 April – Abiy Ahmed, an ethnic Oromo, wins over his challengers to become leader of the ruling EPRDF and therefore prime minister. He launches a comprehensive programme of political reform at home and diplomatic bridge-building abroad.

2018 July – Ethiopia and Eritrea declare their war is over as Ethiopia agrees to evacuate disputed territory.

2020 October – The federal government severs ties and funding to the Tigray region leadership after the state conducted an election deemed unconstitutional by parliament because of the Covid-19 pandemic.