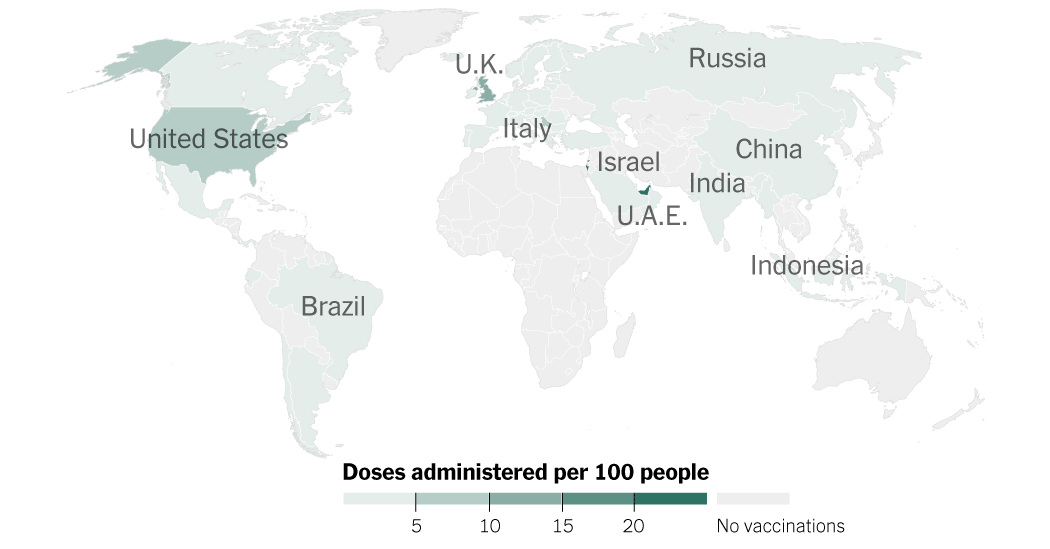 More than 84,900,000 vaccine doses have been administered worldwide, equal to 1.1 doses for every 100 people. There is already a stark gap between vaccination programs in different countries, with most yet to give a single dose.

Double-click to zoom into the map.

Source: Vaccinations data from local governments via Our World in Data

Note: Some countries do not provide data for the number of people who have been partially or fully vaccinated.

While vaccine doses remain relatively scarce globally, most countries have focused their early vaccination efforts on priority groups like the clinically vulnerable; people in their 60s, 70s and older; and front-line workers, like doctors and nurses. Israel is vaccinating its population faster than any other country, with 48.9 doses administered for every 100 people.

After the record-speed development of the coronavirus vaccines, the initial rates of vaccinations have become a contentious issue for many countries.

The European Union had a slow start to its inoculation campaign, with regulatory approval for the Pfizer-BioNTech and Moderna vaccines lagging behind the United States. Other problems hampered the early efforts further: Spain had not trained enough nurses, while Italy, Greece and other countries faced needle shortages.

There is also a striking divide between continents. Vaccination programs have yet to start in Africa, while North America has already administered 4.7 doses per 100 people. Less wealthy countries are relying on a vaccine-sharing arrangement called Covax, which aims to provide two billion doses by the end of the year. Australia, which has had fewer than 1,000 coronavirus deaths, has approved the Pfizer-BioNTech vaccine but first doses are not expected until late February.

Eight different vaccines are being administered around the world, according to Our World in Data. The Pfizer-BioNTech vaccine, which was found to be 95 percent effective at reducing coronavirus infections, is currently being used in 49 countries. Several more countries have approved vaccines but have yet to begin administrations.

All of the vaccines currently in use require two doses for a patient to be fully vaccinated, although a one-shot vaccine by pharmaceutical giant Johnson & Johnson is expected to be approved in the United States within weeks.

Where each vaccine is being used

Note: The Oxford-AstraZeneca vaccine is known as Covishield in India. Other countries may have approved vaccines but have not administered them yet.·Source: Our World in Data