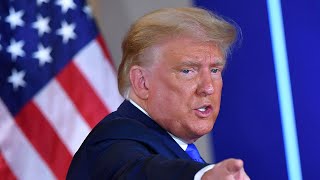 Now the Trump name is many, many times better known internationally than it was in 2015. Could he pick up where he left on with his business ventures and accelerate?

One project could be the Moscow Trump Tower his team had been pursuing deep into the 2016 campaign, despite denials at the time, or building projects in the Middle East.

Another business avenue has also been much speculated upon: Trump TV. Mr Trump was reported to have been considering setting that up should he have lost the 2016 election.

The ultra-Trumpy One America News Network has been pointed to by pundits as one possible route for him to achieve that, taking it over and making himself the star.

Other relevant claims have always floated around in recent years. One eye-catching one that got tongues wagging was Mr Trump reportedly taking interest in an Apprentice: White House edition.

But whatever plans he could be hatching are not guaranteed to go smoothly. One great, grey cloud looms on the horizon for Mr Trump – the ordinary citizen.

Out of the Oval Office means gone are the presidential protections from prosecution, ones that special counsel Robert Mueller ultimately cited in his Russian election meddling investigation.

Where such lines of inquiry lead, their merit and ultimate outcomes, are anyone’s guess –  but the chance of Mr Trump facing court battles of his own is not negligible.

One last, tantalising possibility awaits – the ultimate tell-all book. Mr Trump has bemoaned insiders in his administration for writing such works, but in an overlooked moment last month he raised the prospect. “Do I have the all-time great book?” he asked as an aside in a speech with the cameras rolling. “I have the real book.”

But whatever path he takes, do not expect him to disappear from the limelight any time soon.