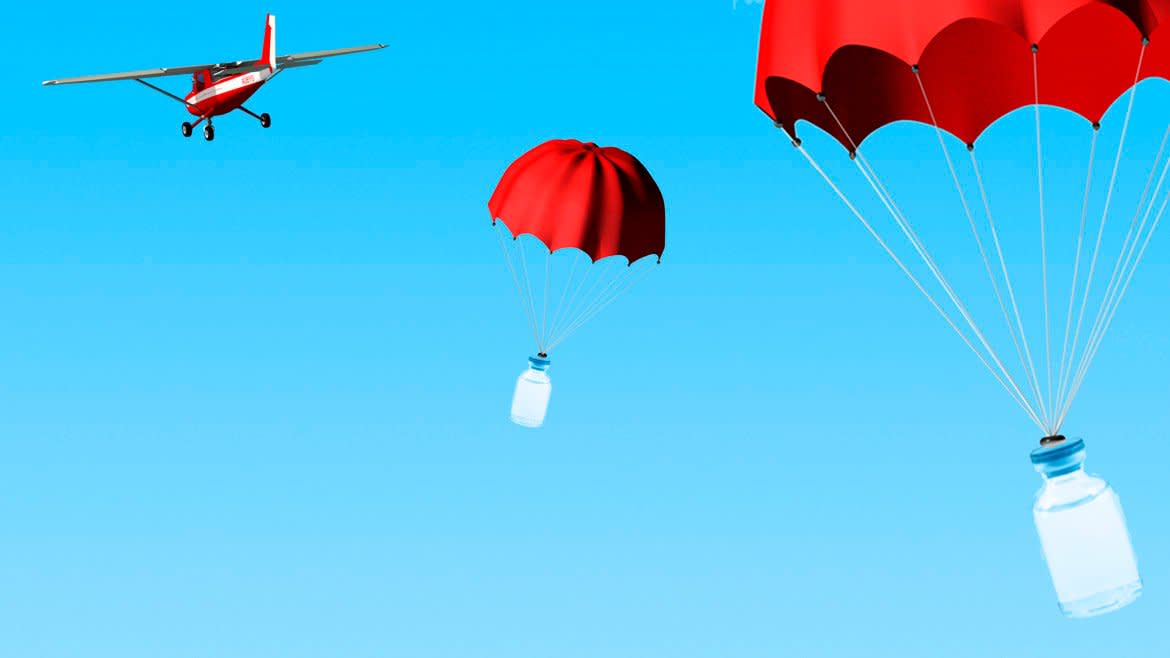 How long will it take to protect the entire world from the coronavirus?

Only now is it becoming clear that, in the best-case scenario, it will take at least 18 months, beginning early in 2021, for vaccines to reach every part of the world where they are urgently needed.

One measure of the magnitude of the task is that to deliver a single dose of vaccine to the world population of 7.8 billion people would take the equivalent of 8,000 flights by the world’s largest cargo airplane, the Boeing 747.

The whole program depends on whether there will be enough airplanes to deliver the vaccine doses—and whether the will and means exist to build a global network able to meet the exacting standards required to keep vials of vaccine at critical temperatures, from when they leave the manufacturer to when they finally reach the places where they will be administered, no matter how far and remote.

The Big COVID Vaccine Challenge Is Keeping Them Super-Cold

Make no mistake, this is truly a moonshot moment. A new global airlift for life-saving meds has to be built at a speed that has never before been accomplished. And, once more, the planning has exposed significant disparities in the resources of advanced nations and those of the underdeveloped world.

In North America, Europe, Russia, China and Southeast Asia, the means exist to rapidly ramp up supply chains and safely deliver vaccines to large populations during 2021.

In Africa, Central and South America and the Indian subcontinent, critical infrastructure will have to be created from scratch. (India has no air cargo infrastructure equal to the needs of its 1.35 billion population.)

And experts warn that even in the developed world, there are serious challenges to overcome.

At the heart of these challenges is the cold chain. This is an already well-established system that ensures that vaccines and other temperature-critical medications are maintained at precise temperatures for the entire time they spend in transit, no matter if the journey takes many days and passes through great variations in climate and handling through airports and ground delivery.

The cold chain was initially created because vaccines to treat smallpox, measles and ebola needed to move through it in order to safely and swiftly get where they were needed—indeed, the world eradication of smallpox would not have been possible without it.

This was one of the greatest leaps ever in global infrastructure in the cause of preventing needless deaths, but it is dwarfed by what confronts a world desperate to gain control of the coronavirus pandemic. The cold chain will have to be hugely expanded.

COVAX, an alliance of vaccine producers and international health agencies created to handle the pandemic, aims to produce two billion doses by the end of 2021. This assumes that all nine of the present vaccines being developed and tested in the COVAX program will prove safe and effective. (Six of them are part of the U.S. government’s $6 billion Operation Warp Speed, and two of them are being developed in China..)

Expecting instant success of all of the vaccines is already a roll of the dice. As the Daily Beast has reported, the vaccines have been developed at an unprecedented speed, their long-term effects are still unknown, and testing is far from complete.

And the problem for the cold chain is that there are basically two groups of vaccines in the pipeline. One group has to be kept in very deep freeze, at a temperature of minus 112 degrees Fahrenheit, while the other at between 35 and 46 degrees Fahrenheit.

This means that vaccines requiring the deep freeze will likely be confined to parts of the world where such demanding standards of the cold chain can be assured, while the others get directed to places where the handling and distribution systems will be less sophisticated and, in many cases, don’t even exist yet.

Glyn Hughes, global head of cargo at the International Air Transport Association, IATA, which represents all the world’s airlines, is closely involved in planning the massive airlift. He told The Daily Beast:

“There is no time to be lost. In many of the countries in Africa, Central America and South America you cannot rely on the same infrastructure for a temperature controlled environment as you can in the developed world. For them, to create what is needed will probably require a combination of commercial and military resources.”

Another gap in the coverage would be the inability to establish secure cold chain infrastructure in “black hole” nations like Venezuela, Yemen, Syria and Iraq, where either war or endemic corruption make it near impossible to carry out safe delivery and distribution.

And there is another specter to watch out for. In countries like Nicaragua, where Daniel Ortega has been the strongman since 2007, or the Philippines, where Rodrigo Duterte rules with an equally iron grip, there is little doubt that the ruling juntas would get priority and perhaps even withhold the vaccines from their opponents, which would amount to biological warfare.

There is also disagreement among the planners about how to phase deliveries of the vaccines, particularly if shortages occur because some vaccines fail to make it through testing.

Some argue that achieving world coverage would happen faster if, at first, only enough vaccines to cover 20 percent of the population of each country were delivered.

Others believe that it is more efficient to give full coverage to each country rather than to return later to serve the 80 percent missed in the first wave.

Even at the optimistic rate of administering a million doses a day it would take 83 days (almost three months) to cover the German population, a country with a highly developed medical infrastructure.

All of this highlights the very real risk of confusing priorities with privilege. Who would be included if only one fifth of the people could be vaccinated? Inevitably such a system would favor elites, like politicians, the wealthy, the military and law enforcement. Would frontline medical staff be included? Would those most at risk because of either their health or their age have to wait?

Experts at international relief agencies like Gavi—created in 2000 to ensure that children get the vaccines they need and credited with having saved the lives of 20 million children—worry that there will be an unseemly stampede in the rich world to get the vaccines while the poor world, with its weak infrastructure, gets left behind.

In addition to these challenges, there may not be enough space on airplanes to carry the vaccines.

There is a world shortage of air cargo capacity. This is due partly to the grounding of thousands of passenger airplanes that would normally carry cargo (alongside passengers’ luggage) in their belly holds, and partly to the pandemic causing millions of people to shop online—and this, in turn, has swollen the competition for air cargo space on the planes that remain in the skies.

And yet the irony is that thousands of widebody jets that could be adapted for this new mission are parked at airports and airfields all over the world for lack of passengers.

Getting them back into the air won’t be easy, and someone has to pony up the money to do it because most international airlines are broke. As Hughes points out, “It’s better to have airplanes flying than grounded, where maintaining them in the required condition is costly.”

But airplanes brought back specifically for the airlift would have to fly with empty cabins.

Early in the pandemic, when there was an urgent need to fly PPE and hospital equipment where it was needed, cabins were used—supplies were strapped to seats and even stuffed into overhead bins.

But passenger cabin climates can’t be adapted to the needs of the cold chain. Vaccines will have to go into special temperature-controlled containers in the belly holds—and, even then, it will take time to provide enough of those containers.

Alexandre de Juniac, CEO of IATA, has called the vaccine airlift “the mission of the century.”

However, when the readers of the industry publication Air Cargo News were polled on their expectations of the airlift, only 11 percent of them felt that the industry was ready to go.

One glaring problem is the absence of a single coordinating international body able to attack all the impediments—technical, regulatory, diplomatic and cultural—that lie in the path of such an ambitious program.

It might seem that the International Civil Aviation Organization, the ICAO, a United Nations body, would be such a body because it is the only one that directly links commercial aviation to the governments of 193 nations—that includes every nation that has an airline.

However, the ICAO has frequently proved unable to use diplomacy effectively with such a variety of political regimes to wrangle and has become notoriously bureaucratic and sclerotic. When asked by The Daily Beast about its role, a spokesman took most of an email to explain what they can’t do rather than what they can and wrapped up by saying, “The planning and allocating of air cargo capacity will therefore continue to be a management decision in the airlines concerned.”

The IATA is much more proactive but they, too, have limited leverage with the airlines. They can’t make the airlines spend money they don’t have, and the total cost of the airlift is expected to be north of $18 billion.

They are, for example, hoping that new air corridors between continents, nations and cities would get passengers back in the air and, at the same time, generate a lot more space for vaccines in the belly cargo.

The air corridors are designed to make passengers feel safe during the pandemic. That requires all the airports to be compliant with new health and safety standards—something that, so far, the U.S. government has conspicuously failed to support. Moreover, this plan will become harder to achieve as infection rates spike again, as they are in Europe.

The expanded cold chain will need a wide reach to include all the places where the nine candidate vaccines are being developed: the U.S., U.K.,France, Austria, China, Hong Kong and Australia.

For sure, an enormous load will fall on the world’s handful of freight-only carriers. Fedex, UPS and DHL are all upping their game and will underpin the resources of Project Warp Speed in America.

“To complement our existing cold chain capabilities in support of the vaccine distribution we are exploring a combination of solutions, including stationary freezers, temperature-controlled ocean containers and refrigerated trailers.”

And China, the origin of the pandemic, is creating a Fedex clone. Its airlines found it hard to handle the surge of demand for PPE, ventilators and drugs in the early stages of the crisis, trying to meet both its own national needs and strenuous demands for help from abroad.

Now the State Council, the Communist Party’s powerful central planning force, has demanded the consolidation of the country’s air cargo carriers. The largest of those has a fleet of only 58 freighters. Fedex alone has a fleet of 378 widebodies. The Chinese airlines are being told to follow the Fedex model and integrate their infrastructure with ground services.

Hughes believes that once the immediate urgency has passed the dependency on airlifts will be eased by adding—as Fedex is obviously already planning—ocean shipping with cold chain compliant containers for longer-term readiness.

Ultimately, for the airlines, if they bring off this mammoth airlift, we could see another case of never letting a good crisis go to waste (the most spectacular example being Amazon.). The expanded cold chain infrastructure will be permanent. The coronavirus vaccine will likely become part of an annual regimen like flu shots. Other health emergencies will need the same rapid response. Air cargo is becoming a goldmine. Just look at the Fedex stock price. It has more than doubled over the last six months.