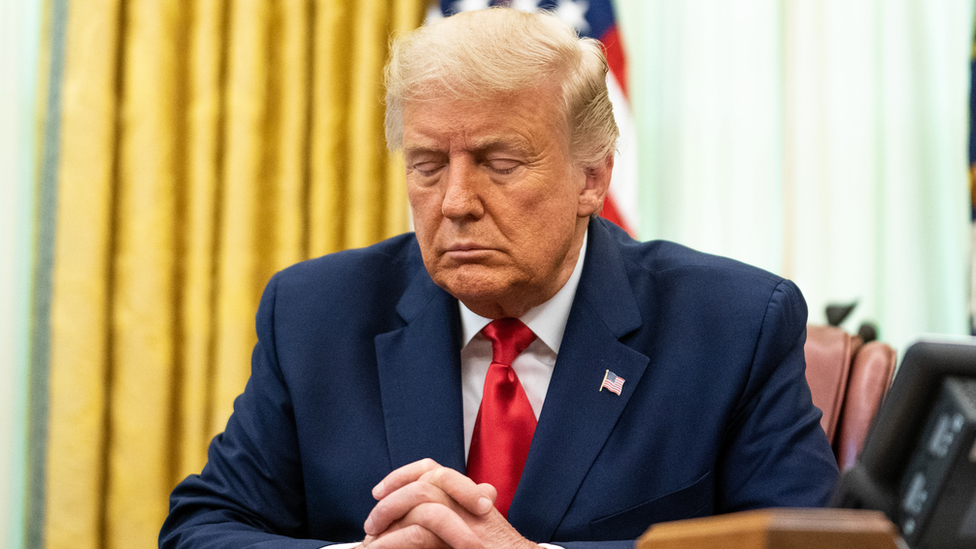 Despite making pejorative remarks about Africa, US President Donald Trump has attracted a devout following among some Christians on the continent.

“Pray for him [Trump] because when God places any of his children in a position, hell sometimes would do everything to destroy that individual,” said Nigerian Pastor Chris Oyakhilome, a prominent televangelist, in a sermon in June.

He has also warned that critics of the Republican president, who is seeking re-election in November, dislike his supporters.

“They are angry at Trump for supporting Christians, you better know it. So the real ones that they hate are you who are Christians,” said the pastor, whose broadcasts are popular around the world, including in the US.

President Trump has been a polarising figure the world over but he is popular in African countries like Nigeria and Kenya, according to a Pew Research poll released in January, where supporters do not appear to be bothered that he reportedly referred to African countries as “shitholes” in 2018.

Both Nigeria and Kenya are deeply religious countries. Mega churches proliferate in the Christian south of Nigeria – Africa’s most populous nation – and in Kenya many politicians go to church sermons to address their supporters, such is their popularity.

Many evangelical Christian groups in Africa, which are mostly anti-abortion, against gay rights and support Israel, were not keen on his predecessor, Democrat Barack Obama, despite his Kenyan heritage.

“The Obama administration had been pushing a liberal agenda here in Africa and that agenda was of concern to some of us Christian leaders. It was a relief that during Trump’s time he’s taken a bit of a back seat,” Richard Chogo, a pastor at the Deliverance Church in Kenya’s capital, Nairobi, told the BBC.

He praised the Trump administration for cutting funding to organisations, such as Marie Stopes, that provide contraception and safe abortion services in several African countries.

The charity criticised the 2017 US funding ban, saying that it “put women’s lives at risk”.

But Pastor Chogo agrees with the law in Kenya where abortion is illegal unless a mother’s health is in danger, saying that to legalise the termination of pregnancies is part of a “population control agenda”.

The abortion debate has been at the centre of US politics for at least four decades.

White evangelicals have coalesced around the issue turning their anti-abortion movement into an influential political force.

After the landmark 1973 Roe v Wade decision by the US Supreme Court to legalise abortion, white evangelicals, who were then not politically affiliated with either of the two main parties, backed Republican Ronald Reagan in the 1980 presidential election against then Democratic incumbent Jimmy Carter.

Even though President Carter was an evangelical, they saw him as a progressive liberal – and their vote proved decisive and helped Reagan to win, NPR’s Evangelical Votes reports.

White evangelicals have since become a key voting bloc for the Republican Party and have extended their influence around the world, especially in Africa.

This is despite black protestants in the US being overwhelming Democrat and critical of Mr Trump’s record, according to a recently Pew Research survey.

The Venerable Emeka Ezeji, a vicar and archdeacon in the Missionary Christ Anglican Church in Nigeria’s south-eastern Enugu state, says his political views are only determined “by what the scriptures say”.

“Faith is personal, mine is pro life… African Christians believe that a Republican president is better for the US and the world,” he said.

He has been praying for Mr Trump to beat Democratic Party candidate Joe Biden in November, and set aside time every day to pray for the president’s recovery when he was recently in hospital with coronavirus.

Like Pastor Chogo, he too believes that Mr Trump’s “frailties” should not overshadow the “common good”.

For example, he dismisses the Black Lives Matter (BLM) movement, which Mr Trump has referred to as “a symbol of hate”, saying it has been “hijacked or detoured from its vision”.

Mr Trump has boasted that he has done more for African Americans than any other president in the US history, often touting low employment in the first three years in office – something Mr Ezeji applauds.

According to the US Department of Labour, black unemployment in September last year was the lowest figure recorded since it started collecting these statistics in the 1970s.

This has changed following the coronavirus pandemic – and in August stood at 13%.

Yet Archdeacon Ezeji feels Mr Trump has more to do for the greater good, quoting the biblical story of Cyrus, a Persian king chosen by God to conquer Babylon which allowed Israelites in exile to return to Jerusalem.

“Trump is the modern-day Cyrus,” he said

“God is saying… he’s my servant who will do my will,” Mr Emeka said.

Rev Juliet Eyimofe Bintie, who is based in Nigeria’s largest city of Lagos, agrees.

“He’s chosen by God,” the theologian and preacher told the BBC.

A fan of Mr Trump since his days on the reality show The Apprentice, she is holding weekly prayers for his re-election and also marks his birthday with elaborate messages on Facebook.

She said that God gave her a message before the 2016 election about the real-estate billionaire turned politician and his support for religious freedom, which Christians believe is under attack.

“He told me he was looking for a bulldog, a man of audacity, because there are certain assignments nice people cannot carry out,” Rev Bintie said.

“He is against a global movement who want to control peoples’ lives. We need somebody who defends the rights of believers.”

She also believes he is not getting the credit he deserves for foreign policies pursued by his administration such as the recent peace deal between Israel and United Arab Emirates.

Pastor Chogo agrees: “Even if you are Saddam Hussein or Muammar Gaddafi, there are one or two things you’ve done for your people that is good.”

He attributes support for Mr Trump on the continent to his straight-talking style, saying African leaders need to be told in unflinching terms to focus on fixing their own countries.

“There’s an increasingly liberal world in the academia and politics, it has felt like the evangelical is a cornered person and was being targeted,” he said.

Not all in Pastor Chogo’s large congregation may agree with him, but most feel that unlike Mr Biden, a church-going pro-choice practising Catholic, Mr Trump – who is not known for his church attendance – is standing up for Christian values the world over.

Mr Trump recently reminded his Christian supporters in a series of tweets that religious freedom and abortion were at stake if he did not win in November.

But Archdeacon Ezeji sees it more in terms of an end-of-times biblical prophecy preached by evangelicals.

“Whether he loses or wins it’s not about Trump, it’s about what God is saying,” he said.

“Trump is like the biblical almond tree which weather watchers used to read for the signs of the time… if he wins it means we have more time, if he loses then we don’t have much time.”