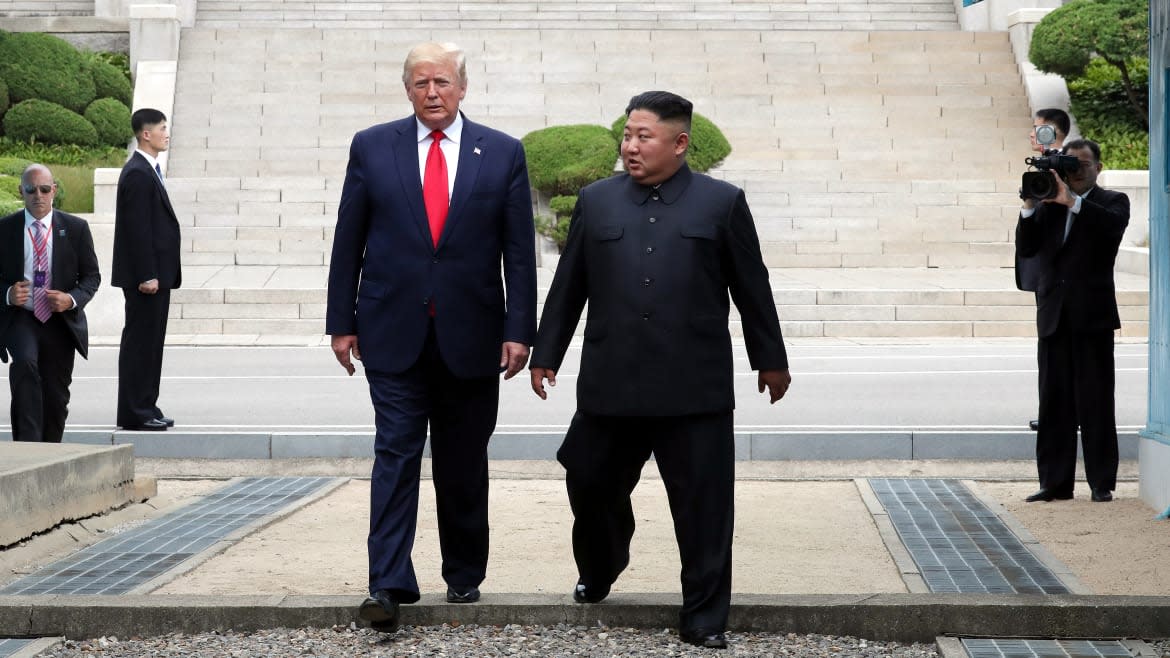 SEOUL—Let the missiles fall where they may, President Trump is still smitten by North Korea’s Kim Jong Un.

Trump, who famously said he and Kim “fell in love” in their summit in Singapore in June 2018, proclaimed Kim “100 percent sharp” at a campaign rally in Florida this week. It was part of a dig against the Democratic candidate, Joe Biden, saying “We have someone running who is not 100 percent.”

Trump’s shout out to Kim among a pantheon of dictatorial leaders including Russia’s Vladimir Putin and China’s Xi Jinping was his first mention of the North Korean potentate since he showed off what purports to be his biggest missile yet. Whether the missile was real or a make-believe mock-up was not clear, but the image of an 11-axle vehicle transporting it past Kim and an array of military and civilian leaders was definitely the highlight of a weekend parade of military might in Pyongyang.

Trump, however, was not alarmed. “Whatever happened to the war we were supposed to be in with Kim Jong-un?” he asked.

No doubt about it, Trump’s love for Kim is not one-sided.

In the aftermath of celebrations marking the 75th anniversary of his ruling Workers’ Party, the impression was that Kim would still like nothing better than to see his man in the White House hold on to his job for another four years.

How else could Kim be sure of building on his three meetings with Trump even though, as the display of that giant missile and a lot of other hardware made clear, he’s giving up nothing, including his nuclear warheads? “I think he will be willing to do a quick deal with Trump if he wins in November,” said Victor Cha, a veteran of the White House staff during the George W. Bush presidency and now a professor at Georgetown.

So doing, Cha reasoned, Kim and Trump could “pick up the pieces from Hanoi” – an allusion to their failed second summit in the Vietnam capital in February 2019 that collapsed when Trump cut off the talks after Kim balked at concessions on nukes.

“Trump might even throw in some U.S. troops,” said Cha, meaning Trump might talk about withdrawing some of the 28,500 U.S. troops in Korea as part of the deal. “He hates having them on the peninsula,” Cha noted, and he could use their withdrawal “as leverage” against South Korea in negotiating for a vast increase in the amount the South pays for the cost of U.S. bases and troops.

With the goal of a deal still within reach if Trump wins, Kim is refraining from ordering nuclear or missile tests. While North Korean scientists and engineers are presumably still fabricating missiles and nukes, Kim has not ordered a nuclear test since September 2017. The North’s last missile test was two months later.

Despite his emotional thanks for “the devotion” of his soldiers “on the anti-epidemic front” and for “removing the aftereffects of natural disasters,” including typhoons, Kim left no doubt his regime had “never intended to carry out its line of equal development of the nuclear program and the economy,” said Robert Collins, who has spent decades analyzing intelligence for the U.S. command here. “It has always been nukes first, economy somewhere well behind.”

Kim’s core message was that he could destroy his enemies if he had to. “Our war deterrent is being developed not for aiming at others,” he said, but “in order to defend ourselves.” That message was clearly intended to show a certain forbearance while Kim considers whether or when to order more nuclear and missile tests.

“Most important, it laid the foundation for continued blackmail diplomacy with the South and the U.S.,” said David Maxwell, retired army colonel, now senior fellow at the Foundation for Defense of Democracies. While trying “to coerce the South to make concessions” despite its alliance with the U.S., the message was also to show “patience with the U.S.” in order to “continue its political warfare strategy after the November election” no matter whether Trump or Biden wins.

“Kim clearly knows that this is a sensitive time in Washington, in the middle of a presidential election campaign,” said Shim Jae-hoon, long-time contributor to Yale Global. “He fully appreciates Trump’s unpredictable behavior so much so that he wants to avoid upsetting him at this time. Kim wants to avoid making his nuclear weapons a major campaign issue.”

If North Korea appears largely overlooked in the current campaign, however, it’s got to emerge as a major issue afterward. And if Biden wins, he could be expected to order a whole new review process that would eradicate whatever special relationship Trump thinks he has formed with Kim.

Brian McKeon, former deputy undersecretary of defense, now advising Biden on foreign policy, indicated a go-slow approach that Kim’s not going to like.

The Biden administration, McKeon said in an interview with Yonhap, the South Korean news agency, would work with “our treaty allies in Japan and Seoul” along with China, North Korea’s lone ally and benefactor, “toward what we think is a common goal that everyone shares—denuclearized North Korea and ensuring peace and prosperity in the region.”

As for asking South Korea to agree to a vast increase in payment for U.S. bases and troops, as Trump has demanded, McKeon indicated the U.S. would be far more flexible. “We would approach those negotiations in an objective manner and not use them as a cudgel against our ally,” he was quoted as saying.

South Korea’s ambassador to the U.S., Lee Soo-hyuck, agreed there would be huge differences between Trump and Biden on North Korea. Biden appointees, including some from the Obama years, would likely conduct “low-level reviews,” he said, “with the president giving his approval rather than employing a top-down approach.”

Regardless, Lee Sung-yoon at the Fletcher School of Tufts University believes another test of an intercontinental ballistic missile is going to happen—and a deal to end the nuclear program is out of the question.

“For Kim to behave and disarm would be to relegate himself to his true status as a cruel dictator presiding over a small, poor and backward kingdom,” said Lee. ”As Trump pretends the North Korean nuclear threat is over,” he argued, “Kim is showing the world who’s the boss.”

Might a Biden victory be all that Kim needs to resume testing? “If Biden wins,” said Victor Cha at Georgetown. “I think North Korea will start provocations because they would want to signal that strategic patience will not be tolerated.”