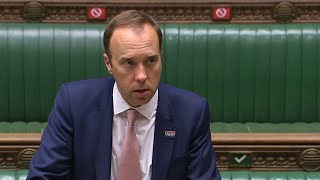 Which areas are in local lockdown and what are the rules?

Tighter restrictions on social mixing were imposed in the Liverpool city region, Warrington, Hartlepool and Middlesbrough from midnight on October 3. Further measures, including the closure of pubs, gyms and casinos, are expected to be announced in the Liverpool region by the Prime Minister on Monday 12 October.

In a statement, Health Secretary Matt Hancock told the Commons of the restrictions introduced on October 3: “Earlier this week we brought in further measures in the North East, however in parts of Teesside and the North-West of England cases continue to rise fast.

“In Liverpool, the number of cases is 268 per 100,000 population, so together we need to act. Working with council leaders and the mayors, I’m today extending these measures that have been in the North East since the start of this week to the Liverpool City Region, Warrington, Hartlepool and Middlesbrough.

“We will provide £7 million to local authorities in these areas to support them with their vital work.”

He said the rules would be the same as those announced earlier in the week for the North East, which include a ban on social mixing between different households.

He said: “We will bring in regulations, as we have in the North East, to prevent in law social mixing between people in different households in all settings except outdoor public spaces like parks and outdoor hospitality.”

Joe Anderson, the Mayor of Liverpool, said there was “potentially a legal challenge” if  businesses were shut “without a valid reason”, noting that transmission rates for Covid were 10 times higher in schools than pubs in the city.

He warned that if the Government did not offer economic support to people and businesses during the lockdown they would have to pay instead for them to be on benefits.

Read more: Can I go on holiday in local lockdown?

Households in Northumberland, North Tyneside, South Tyneside, Newcastle Upon Tyne, Gateshead, Sunderland and County Durham have not been allowed to meet other households indoors, including in hospitality settings, since September 30.

“In the North East, new rules mean you cannot meet people from different households in social settings indoors, including in pubs, restaurants and your home,” Boris Johnson wrote, following initial confusion about the new laws.

He also urged people in the North East to “avoid socialising with other households outside”.

Since September 18, hospitality for food and drink has been restricted to table service only and a 10pm curfew was placed on leisure and entertainment venues, curbs that were then introduced nationally.

All of these areas have seen a significant increase in cases, with Sunderland now having an incidence rate of 185.5 per 100,000 of population, up from 107.3 the previous week. In South Tyneside, Gateshead and Newcastle, this rate is above 70.

“I know that these decisions have a real impact on families, on businesses and local communities. And I can tell everyone effected that we do not take these decisions lightly,” said Matt Hancock, the Health Secretary.

“I know that the people of the North East will come together to defeat this virus, as defeat it we must.”

Leeds entered a local lockdown from midnight on September 26.

Individuals are banned from socialising with people indoors or outdoors at each other’s homes. A fine will apply if this is breached. Exemptions apply for children with parents living apart, existing social bubbles, and tradespeople including builders.

Leeds Council said the local lockdown measures would be in place for “as long as it takes” to stem the rate of infection, a spokesman told the Yorkshire Evening Post.

All existing national restrictions on the rule of six, social distancing and 10pm hospitality curfews apply.

Neath Port Talbot, Torfaen and the Vale of Glamorgan all had new restrictions introduced from September 28.

The restrictions mean people should not meet indoors, aside from extended households, and nor should they enter or leave their regions without a “reasonable” excuse.

The rules have also been tightened in Blaenau Gwent, Caerphilly, Bridgend, Merthyr Tydfil, Newport, and Rhondda Cynon Taf. And on October 1, new restrictions were introduced in Conwy, Flintshire, Denbighshire and Wrexham.

People are not allowed to enter or leave these areas without a reasonable excuse, such as travel for work or education, and people will only be able to meet others they don’t live with outdoors for the time being.

In those areas, people have not been allowed to leave or enter the county area without a “reasonable excuse”, people over 11 must wear face coverings in shops, and people will only be allowed to meet outdoors. Extended households have also been temporarily suspended.

London has not yet confirmed any local lockdown measures, but it has been added to Public Health England’s watch list, which sets out areas of concern following a rise in infections.

The Mayor of London, Sadiq Khan, has not ruled out introducing new lockdown measures specific to London amid a rising tide in infections.

Mr Khan had what was described as a “constructive” conversation about potential measures with Mr Johnson on September 22.

Mr Johnson also said he has not ruled out tougher action in the capital: